The Wanderer Returns to Shannock 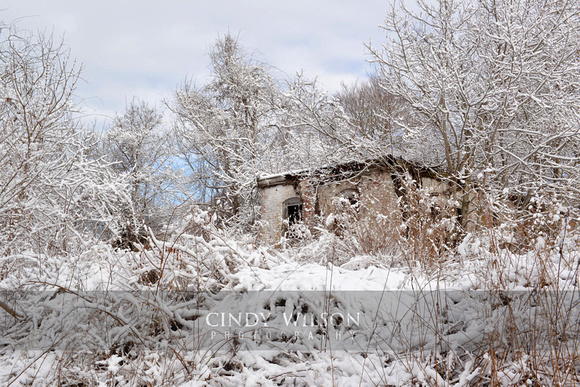 Let me introduce you to a very old friend. This is the George C Clarke/Columbia Narrows  Mill in Shannock Village, Richmond, RI. I began photographing this mill when I was first a photography student in 1977. In this days, I was not concerned with the technical approach to photographing; it was the sheer intrigue of exploring, finding something ‘hidden in the jungle’ that no one remembered or appreciated. Of course everyone knew about this place, but I was bringing it home to a new audience, my fellow students and friends.

Since the early days, much of the underlying drive in my work has been with that same love of discovery and documentation. With my most recent project, documenting the ruins of the Industrial Revolution along the Blackstone River in Rhode Island and Massachusetts, the rekindling of this subject matter has brought me back to Shannock.

So, on a recent Sunday morning, after an early spring dusting of snow, I went back to my familiar stomping grounds, but I had never seen it before with this beautiful light., and the added dimension of a fresh snowfall. During the entire ride along Route 2, I continually remarked about how beautiful a morning it was; the way the powdery snow rested on every vine, every limb, deep into the woods.

This image was one of the first made, just as the skies began to clear, and the breeze began to blow the dusting off the trees. This corner of the mill peeking over the brush speaks to me as a watchful sentinel still standing proud, but wary. From this angle, one cannot tell the roof is long fallen in, the panes of glass shattered, the building pretty much an empty shell. Although the property is now a deteriorated relic, it is a living entity to me. I often could not find the right words to describe my feeling when I first started photographing mills, using the adjective ‘heroic’ more than any other. In a sense, this is more accurate than not, since what this building represents is an era of prosperity. The town of Shannock came to be around the economic production of the mill. The Industrial Revolution and textile manufacturing, created this mill, and then left it fallow as manufacturing moved south. What is left is a reminder of what was once state of the art, not relegated to the forgotten.

Enter me, the ‘millgroupie’, intrigued by what has been coined ‘Red Elephants’. On this particular March morning, the interior was coated in white, over the carefully placed contents, and the intruding natural vines and brush. Imagine, the vastness of this once vital space cropped down to a few square feet!In this fresh and clean light, subjects that in and of themselves lack anything spectacular reveal themselves. A window sill, coated in a dusting of snow and debris is tactile and overshadows the bright exterior. A haphazard array of bricks in a blocked out window takes in the air of a painted fresco, with vein like lines crisscrossing the patina of plaster. A collection of bottles backlit and translusent become instead a formation of frosted  circles. It seemed to me I'd never seen the mill with this clarity. Everywhere I looked, something came alive. If only all photo excursions were this fruitful!

I never know what gifts I will find in my old Richmond RI friend. This particular morning was a fine one in a long line of visits. Soon, the spring growth will fill in many of the abandoned spaces, and a new set of opportunities will present themselves for those listening…and seeing.