Tufts on the Tarmac

Tufts on the Tarmac

Baking in the sun, drowning in the rain, buried for so long under the weight of the abandoned concrete, tufts of life emerge from the cracks, slowly retaking their ground. 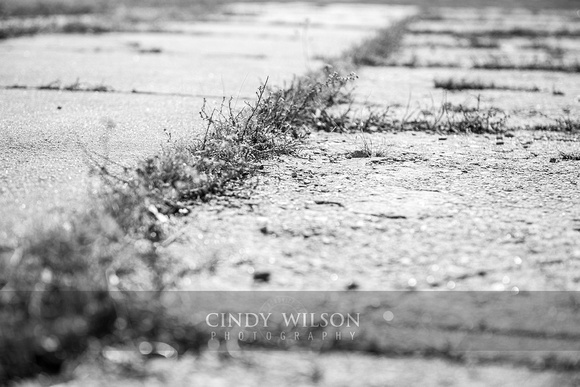 Tufts on the Tarmac, Rocky Point

This image was taken on the grounds of an old amusement park. When I first approached this scene, I responded to the sea of graphic concrete slabs crisscrossing in perfectly straight lines running down to the bay. However, there was no focal point, no intimate connection. The experience begged representation; I came back to it time and time again. Finally, I saw the connection was in isolating a piece suggesting the whole. Lying on my belly focusing only two feet in front of me with a very shallow depth of field the emerging life became alive. The image was now not so much about the abandoned slabs of disintegrating concrete as it was in the tufts of life, surviving as a hidden network under a paved world.

Connecting the moment experienced to a photograph often doesn’t happen right away. The graphic remnants of concrete decking surrounding a public pool, first captured my interest. Upon closer contemplation the lines between the slabs, bursting with life, became my metaphor for abandonment and entropy. As for the cement, questions remain. The ghosts steps of barefoot children screaming in delight, are alive in my imagination and linger as vibrations traveling somewhere in the earth.

marcia kiernan(non-registered)
Your gift of photography has brought you to such a high level of awareness. I have passed sidewalks etc with the same scene and never thought to give it the value it deserves. From your perspective I see the tenacity of life in those tufts of grass. I can relate it to obstacles that we encounter through life and pushing through them. Some succeed and some don't. A few years ago I was part of your outing at Fort Adams and took one of my favorite pictures of a single plant shooting up from the floor of the old ruins. Light from a window illuminated it with beautiful back lighting. I look forward to going on another excursion with you this summer or fall as I am only in RI at that time.
I love your writings as much as your photography. You are a gem!
Grace(non-registered)
Love this, Cindy. You grabbed me with nature re-emerging and knocked me out with the ghost steps lingering as vibrations traveling into the earth!!
No comments posted.
Loading...
Subscribe
RSS
Recent Posts
On Vocation Transitions The Web of Light After the Eye Candy is Gone - A Creative Challenge Seeing Through Challenge Emergence and Light The 59th Annual Wickford Art Festival Wistful Wisteria Vision and Style Tufts on the Tarmac
Keywords
photography metaphor abandoned architecture photography workshop sunrise industrial creativity black and white landscape
Archive
January February March April May June July August September October November December
© Cindy Wilson Photography
Powered by ZENFOLIO User Agreement
Cancel
Continue