C-Scape; a Haven in the Dunes, Provincetown, MA 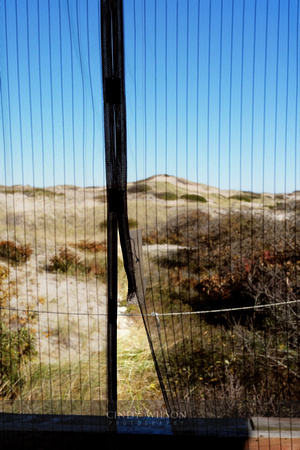 Portal to the Dunes, Provincetown

C-Scape, A Haven in the Dunes, Provincetown, MA

For one week, this was the view I sat with while I read, wrote, had my morning coffee and lunch. I was the recipient of one week in the Provincetown Dunes, in a wooden shack without running water, electricity, internet or indoor plumbing. My days began while it was still dark, as I looked through this window to the east, in the direction of  sunrise. With my woolen hat covering my head, and a tripod on my shoulder, I would pass through this doorway into the world of the vast dunes of the Cape Cod National Seashore. Color would come over the silhouette of the grand dune as I would come to call it. I would trudge up the sand path to the top of the dunes overlooking the beach, and down I would descend...'Geronimo!'. On this, the first morning of my stay, the sky to the west turned pink and reflected on the ocean and sand. The night had been so cold, and the sea air so humid, that condensation formed on my lens, leading to a constant battle with the moisture.

Once the sun broke the horizon, I headed back up the dune path to the shack. However, the moisture was not just isolated on the beach. There was a low lying fog that sat right behind C-Scape in the gentle golden light of the early morning. This too lasted long enough to be photographed. I have always been drawn to early morning light. The feeling of being the only witness to this natural glory fuels me with inspiration and enthusiasm. Mist in the Dunes

In the dunes of Provincetown, I kept my eye always to the sky. This particular morning, the clouds kept morphing into different patterns. Later on, as I sat on the deck in one of two Adirondack chairs, the sky turned into an inverted horn of plenty, with the windswept swirl in the sky and seeming cotton balls at the end of each tendril. 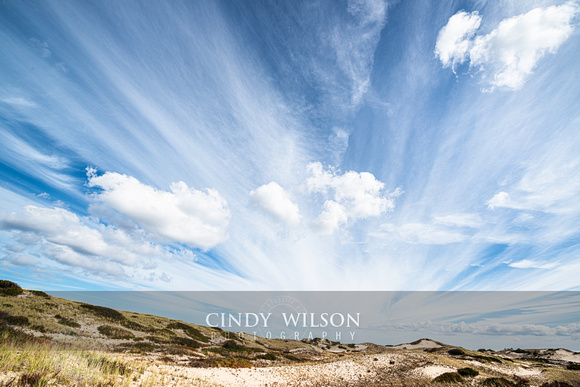 For seven days, this was my entertainment, muse and focus. Once I had been 'delivered' I was by myself in the middle of the vast landscape of dunes and sky. Once the first misgivings of what would I do for an entire week...gave way to the freedom to read, photograph, draw and contemplate, I thrived in the isolation. I listened to the wind, the surf and the occasional mouse scratch. My goal was to slow down and develop a sense of stillness in which to grow. Ultimately this experience, once familiar, will allow me to teach others this more spiritual way of creating.

There will be additional musings and images to follow, with different themes and lessons learned.

Barbara G. DeCesare(non-registered)
Your musings tie the connection of life experiences, feelings and photography. They are twice valuable when you share them, as you do, with others. Thank you for this.
Barbara Bourgette(non-registered)
Such inspired images! What a profound experience your week must have been in one of those famous dune shacks. Thanks for posting. Babs
Pinkie Sweet-Holland(non-registered)
Cindy, What an amazing gift you were given. Awe-inspiring and your photography and journaling support your sense of peace and excitement. A very spiritual event that many of us wish to witness. Bless you, my friend for sharing your works.
No comments posted.
Loading...
Subscribe
RSS
Recent Posts
Transitions The Web of Light After the Eye Candy is Gone - A Creative Challenge Seeing Through Challenge Emergence and Light The 59th Annual Wickford Art Festival Wistful Wisteria Vision and Style Tufts on the Tarmac New Explorations in Gesture
Keywords
photography abandoned architecture photography workshop metaphor sunrise industrial creativity black and white landscape
Archive
January February March April May June July August September October November December
© Cindy Wilson Photography
Powered by ZENFOLIO User Agreement
Cancel
Continue